Today I ran across something hilariously funny: a site called Tolkien Crackpot Theories. I’m going to quote my favorite theory here for your immediate enjoyment. To prepare yourself, first study this shot from the animated Lord of the Rings: Part One by Ralph Bakshi. 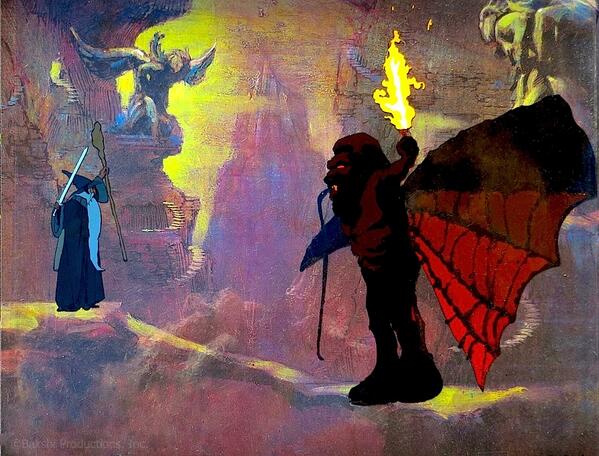 Come now. You have to understand that the text is absolutely clear on the existence of the bedroom-slippers on the Balrog. After all, we read that after it leaped across the fissure of fire, “a black smoke swirled in the air”. Now, the Balrog is a creature of fire: no intrinsic part of it would smoulder and produce such smoke because of a few measly flames.

Note, too, that the black smoke swirling is associated with the flames which “roared up to greet [the Balrog], and wreathed about it”: parallel structure implies that the smoke, too must have wreathed about the whole creature. However, as smoke rises, this points unambiguously to a source for the smoke near the bottom of the Balrog’s form, namely, at its feet.

What, then, can we expect on the Balrog’s feet? We know that it is “of man-shape maybe, yet greater”: whatever it’s wearing must be fairly big, but the sort of thing we would expect on a man. Now, we also know that it was surrounded by darkness, of its own choosing (“. . . a great shadow, in the middle of which was a dark form”).

Why would a manlike being with at least some Maia powers surround itself in shadow? After all, it’s clear that the Balrog can light itself on fire if it wants to; there is no natural reason for it to shun light, UNLESS it was asleep, and just woke up! (Wouldn’t you wrap yourself in shadow if you were dragged out of bed to deal with tresspassers early in the morning? Who knows what this thing’s sleep schedule was like: we know it occasionally liked to hibernate, after all. The Fellowship’s intrusion could have come weeks before it had planned to wake up . . . and heaven help Pippin if his stone knocked it awake!) This clearly explains why it was so upset with the Fellowship, and how Gandalf was able to defeat it at all.

So, what would the Balrog be wearing on its feet right after being dragged out of bed, that would give rise to such characteristic black smoldering smoke? What else but fluffy bedroom slippers! I honestly don’t see how this could be at all unclear.

Incidentally, it’s further confirmed when Gandalf mentions that the Balrog became a “thing of slime” in the water: have you ever felt wet, muddy, dirty, once-fluffy bedroom slippers? Horrid things, let me tell you. No wonder Gandalf chose to “bring no report to darken the light of day”! The true horror of Gandalf’s predicament is now clear, when he explains that his only hope to find the surface again was to pursue his enemy, “clutching at his heel”. Yuck!

I would like to think that this will put the debate to rest, but I know that there are always those who will refuse to accept the facts and try to force their own interpretations on what Tolkien wrote. In many cases, there is room for ambiguity, but here, I’m afraid, the truth is clear. If this great debate has to open up again, then so be it!

The original site has a lengthy rejoinder to this remarkably well-constructed argument, but I’ll only quote one portion of it here:

I refer you to The Treason of Isengard, p. 431 hardback. Quoting CJRT: “The form of Gandalf’s story in TT is almost reached in the ‘fair copy’ manuscript . . . He tells that clutching at the Balrog’s heel ‘I set my teeth in it like a hunting hound, and tasted venom’ . . .”

It’s hard to argue with such astute observations. I’m glad to know there is such brilliant thinking to be found on the Internet amidst all the muck. And I’ll never think of the Balrog the same again!

(Note: To honor the forms of intellectual honesty, I must state that these came from posts by Steuard Jensen and O. Sharp to the newsgroup rec.arts.books.tolkien.)