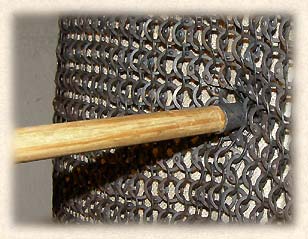 I find this question fascinating. As both a gamer and a fantasy writer, I like to get as close to reality as possible, if only to make the fantastic elements of my games and stories that much more fantastic and cool. So a while back, I spent several days researching this question, and I collected a fair number of interesting resources.

To my dismay, I discovered that there are lots of factors to consider when examining this question.

This isn’t a simple question. It’s riddled with complicated factors that are all interrelated. I never came to a definite conclusion myself, except that in general, it seems like arrows seldom (if ever) would have penetrated plate armor. The circumstances would have needed to be just right for that to happen.

I’ve collected most of the best resources I found below, if you’re interested in digging into this question on your own. This is the only collection like this that I’ve seen. If you found it useful, or if you find anything that’s missing, please leave a comment.

English Longbow Testing (PDF), an article by Matheus Bane documenting some testing he did with various types of arrowheads and armors. This test uses a clay slab behind the armor to show how deeply the arrows would have penetrated human flesh. Only the needle point bodkin penetrated plate armor deeply enough to cause a potentially fatal wound.

A fascinating discussion on MyArmoury.com on the ability of the English longbow to penetrate plate armor. The folks on MyArmoury are generally smart and very well read on these kinds of subjects. It’s a long, involved discussion. Casual browsers need not apply.

This blog post from medieval recreator Will McLean was the source of one of the other links I’ve given here, and provides an interesting critique of some experimental bow shooting.

Another blog post from Will McLean discussing metallurgical findings from historical armor.

Weapons That Made Britain. In this episode, historian Mike Loades discusses the English longbow. This link leads to a forum where the entire show can be seen via a series of linked YouTube videos.

The following two videos document a test conducted by Mike Loades using a modern arrow-shooting machine to replicate ancient weapons. Although the arrow penetrates the breastplate, it doesn’t go deeply enough to cause injury.

English warbow versus tempered sheet metal. These three videos are attempts by various groups of people to test the penetration of the English warbow of various kinds of sheet metal and breastplates. Although these tests are interesting to watch, they aren’t rigorous enough to really draw conclusions from. Many of the arrows break through the plate, but there’s no way to tell how deeply and whether the strikes would have caused significant injury.

Crossbow against steel breastplate. This video shows some guys shooting a 1000 pound crossbow using various heads on the quarrels. None of them pierce so far that the quarrel sticks into the breastplate. It looks like a few of them might have pierced up to a quarter inch or so. With some linen padding inside, I doubt the wearer would be significantly injured—although the so-called armor breaker and the heavy quarrel look to pack quite the punch. Probably the biggest flaw in this test is that the breastplate is just propped up on a board. It gets knocked around a lot—not exactly the same as someone wearing it.

What do you think?