Polaris is a game that looks like it would be an amazing experience to play. I’ve tried describing it to people, but the author, Ben Lehman, does a much better job. The following image and quoted material is taken from his Web site. 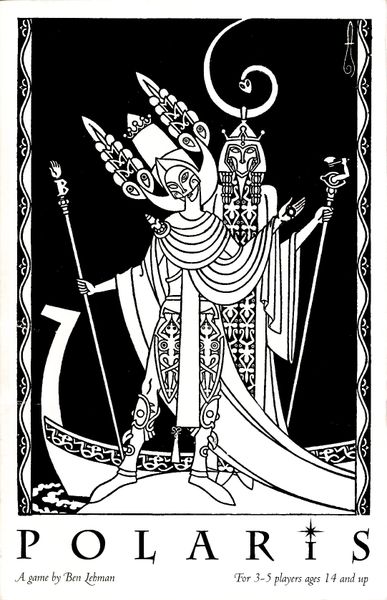 “Once upon a time, as far north as north can go, there lived the greatest people that this world will ever see. They are gone now, destroyed just as the world destroys all beautiful things. All that remains are these moments we call memories, moments frozen from the flow of time.

“Polaris: Chivalric Tragedy at Utmost North is a game for three to five players set during the final years of the Northernmost People, just before the remnants of their civilization were swallowed up by their own Mistake.

Note: A poll used to appear here, but I have since discontinued using the plugin required to display it. Apologies to those who have come late to this post.

“The protagonists of the story are Knights of the Order of the Stars, beholden by ancient oaths to serve the stars and protect their people. The antagonists facing the knights are multitudinous — demons from the Mistake, doubters from the people, and even betrayers within the brotherhood of Knights.

“The full moon’s light is bright and strong, the new moon’s shadow soft and loving. The heart sings with courage at the duty, but the demon in his belly gives no quarter. Say the word, gentles, and see his final flaw . . .

“Polaris uses a set of simple and easy-to-learn mechanics to help guide your game’s storyline to an appropriate tragic ending. Each player at the table guides the protagonist in a different capacity, and the central points of the story are further shaped by the twelve Key Phrases.

“This is no longer a history; this is not yet a story. This is all that remains. Whatever else is what you make of it.”

Doesn’t that sound awesome? I love the sense of setting and mood that Ben Lehman’s prose evokes. This is another game where you narrate freely, within a small set of guidelines, until someone interrupts. The twelve Key Phrases are things like “But only if” and “It shall not come to pass” and “And so it was.” You narrate your own character’s actions, and the person sitting across from you, called your Mistaken, narrates the actions of your enemies. For example, let’s say my Knight, Caelum, is battling a demon from the Mistake. The demon has captured my Knight’s true love, Pleione, and is trying to drag her down to the demonic abyss.

“I draw my sword of ice and bar the demon’s way,” I narrate.

My Mistaken jumps in. “Behind the demon, you can see Pleione clutched in its barbed tail. She is struggling and desperately shouting, but her words are drowned out by the howling wind. Smiling wickedly, the demon gestures, and stinging ice particles begin to whip against your face.”

I take over the narration again. “I lunge forward, my sword whistling through the air, and hack the demon’s arm off. Blood stains the snow red.”

Unwilling to merely accept this, my Mistaken decides to use one of the Key Phrases. “But only if the demon’s blood is toxic, and it leaves your ice sword pitted and dull.”

I don’t mind, so I decide not to challenge that. I use one of the Key Phrases to indicate as much: “And that was how it happened.” Now I can continue. “Despite the damage to my sword, I leap onto the demon’s head and ram the ruined blade deep into the jelly of its eye.”

My Mistaken adds, “But only if the demon does not die and wraps its tail around Pleione’s neck, injecting poison into her blood and beginning to strangle her.”

“But only if the poison will not kill her nor stain her beauty,” I reply.

“But only if she becomes deranged, and forever more when she looks upon you, she can only see the demon before her eyes.”

I can’t accept that. “You ask far too much.” According to this Key Phrase, my Mistaken must now offer an alternative, and I get to pick between them.

My Mistaken thinks for a moment, trying to invent something even worse. “But only if the demon rakes your face with his claws, horribly disfiguring you, and Pleione is filled with pity for you instead of love.”

I have to pick one. I choose the second alternative. “But only if the sight of Pleione being strangled fills me with supernatural strength, and I tear the demon’s head from its shoulders with my bare hands, killing it.”

“It shall not come to pass.” My Mistaken really doesn’t want his demon to die. This Key Phrase forces both players to roll the dice to see who wins. I roll higher, so my statement stands. I have saved my true love, but at great cost.